Most business people know the general advice they have to follow if they want to use Instagram to build their brand. You have to be consistent, engage with your audience and – most importantly – use hashtags. Hashtags are absolutely key in getting the most out of this social platform (which has 800 million active monthly users) but, very often, they can become something of an afterthought. Which is where our expert guide to Instagram hashtags comes in!

It’s an unfortunate truth that simply posting every day (as well as creating Instagram Stories) can take up more time than you really have to spare, given that you already have a business to run – so it’s understandable if thinking about hashtags is at the bottom of your to-do list! But if you or a member of your team has a few moments , here’s how a little extra research can make a big difference.

Hashtags and How to Use Them

It’s fairly common knowledge that when it comes to reaching new people, Instagram’s main currency is hashtags. With last year’s algorithm changes making it harder for the people who follow you to see your content, and the new option to follow certain hashtags, they are the main way to get your posts in front of more people, particularly those who haven’t seen your feed before.

How you use these hashtags, which ones you choose and how many of the allocated 30 you assign to each post can make a big difference to how effective they are. So what are the extra steps can you take to make sure you are on the top of your hashtag game?

Make your own hashtag, but don’t use it in isolation

Businesses are often advised to create their own branded hashtag. While this is a great branding exercise, it’s important to make sure this isn’t the only hashtag you use (or one of only a small handful). This is especially true if your business is:

In the early days, you’ll probably find that your hashtag only reaches a very small audience, which means it would be unwise to rely on it. Placing it amongst more popular hashtags is how you’ll grow your audience, and if you want, you can make sure it’s always the first one you use so people begin to recognise it more.

Once you have a bit more of a following, you can increase the reach and visibility of our hashtag by using it in competitions and including it in your other promotional materials. Be creative – hashtagging your brand name isn’t a bad idea, but if you can make it more fun and interactive, it will ultimately have more staying power.

A good source of inspiration is other successful hashtag campaigns of the past. When feminine hygiene company Always created the hashtag #LikeAGirl, they turned the sexist insult on its head, gaining momentum with an empowering message that resonated across their audience. This hashtag has now been used 967,945 times on Instagram.

It may not have directly advertised their business, but as a brand-building effort that communicated their values and beliefs, it did extraordinarily well.

Aim to use all thirty allotted hashtags.

You may have read that to use all of the hashtags Instagram allows in a post is a somewhat desperate move, that other users don’t particularly appreciate. However, unless you have the luxury of tens of thousands of followers, this “hashtag abuse” really isn’t something you can afford to worry about. Beyonce and Deliciously Ella can get away with forgoing hashtags if they choose, because their audience is both dedicated and utterly enormous – but this is a luxury that simply doesn’t apply to most.

By using as many relevant hashtags as you can, you can reach far more of an audience than you otherwise would have done, and drive your engagement upwards. In order to keep your captions neat (and not assault followers with too many hashtags), you might also want to create a ‘gap’, putting them all in a block at the end of your post that readers can just skim over. Alternatively, you can also comment on your post with a set of hashtags. For example: 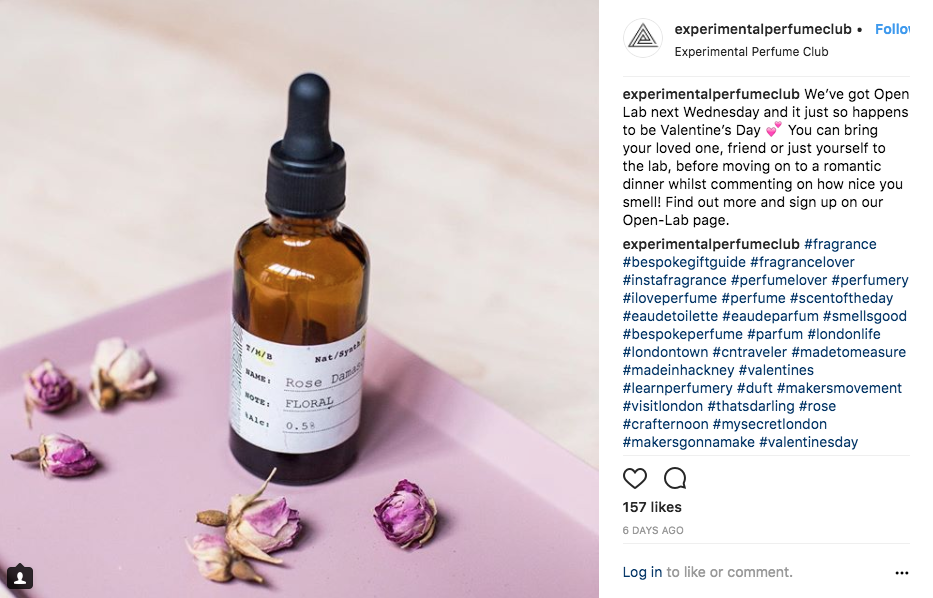 Be aware of banned hashtags.

Instagram regularly bans hashtags when they become populated with posts that violate their community guidelines. There are many obviously inappropriate hashtags, which brands won’t be using in any case, (well, outside of a particular industry, but the less said about that the better!). Others, however, have the potential to catch you off guard.

Hashtags such as #pushups, #humpday, #todayimwearing, #boho, and even #books are just a few examples of the seemingly innocuous hashtagsthat your business might use, but have surprisingly been banned. The more you inadvertently insert them into your caption, the less visibility your post will have, and you’ll be missing opportunities to get your content in front of a big audience.

To keep up to date, check any hashtags you’re unsure of by searching for them on Instagram’s explore tab. There will be an alert once you’ve scrolled down that reads: “Recent posts from #… are currently hidden because the community has reported some content that may not meet Instagram’s community guidelines”.

Mix hashtags from your niche with popular hashtags.

Often, you’ll want to join the bandwagon, and use some of Instagram’s most popular hashtags. Many simple ones like #instagood, #streetphotography and #photooftheday are checked regularly by users, giving them great traction. Using these infrequently will likely increase your engagement and your reach.

On the other hand, hashtags that relate to your niche will put your content directly in front of the people who are most likely to be interested in it, and garner the interest of a naturally more engaged audience.

As with most things though, there’s a balance to be struck. If you post generic hashtags like “Instagood” all the time, you’re likely to be swallowed by the crowd; but if you only ever stick to a niche, fewer people will see you.

This is why it’s so important to alternate your hashtags between the two groups, and use as broad a spectrum of hashtags as you can. Keep them relevant, though – there’s no use using “vegan” just because it’s popular if your photo is of your office space!

Check out what are the influencers in your industry are using, especially the bloggers and “digital natives” who are often ahead of the crowd, and more aware of budding trends. Look too for the popular hashtags that are a little less obvious, such as the very popular #livethelittlethings or #alittlebeautyeveryday. These hashtags are a little more poetic, and tend to have a more engaged audience than the more generic #like4like or #photography.

Find out the origin of the hashtags you are using

If a hashtag is popular, but there isn’t a clear reason why (i.e. it’s not just #love or #sunset), it can be well worth researching their origin. Firstly, this can help you use them appropriately, so they aren’t tagged to random or irrelevant posts. Secondly – and more interestingly – they can offer some unique opportunities.

For instance, the popular #flashesofdelight was created by the lifestyle brand Glitter Guides. Anything fun, girly, bright or pastel shaded fits well under this hashtag; compellingly, Glitter Guides will also look through the hashtag, liking and even reposting their favourites. This would expose your brand to their considerable audience. In fact, there are many big accounts who will feature your photography – you just need to use the correct hashtag, know what they are looking for, and make sure your content is exceptional.

Other hashtags, such as #thatsdarling (for the darling moments in life) and #mybeautifulmess (aimed at crafters and artists) have built a similar culture around themselves. The trick is just finding the ones that are perfect for you.

Consumers Love Livestreaming — And You Should Too

Ready to get the conversation started?